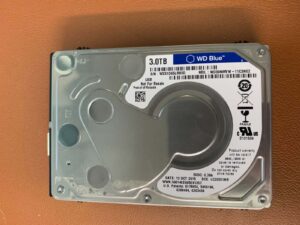 This Western Digital My Passport external hard drive came to me from a client that had tried another data recovery company first. He had sent it out to one of the big data recovery companies and received a quote of $2500 for the recovery. These multi-thousand dollar quotes are not unusual in the recovery industry, I hear from clients all the time about these high quotes. While the family photos on the drive were worth that much to them, they decided to see if they could find a better price for the recovery as $2500 was not in the budget. They had found us after calling their local computer repair shop to see if they could recommend anybody else besides the big recovery company they had already tried. The shop told them about us, so they got the drive back from the big recovery company and gave us a call to discuss their hard drive issue. They reported that the drive had just stopped working and was no longer showing up on their computer. They … Read more 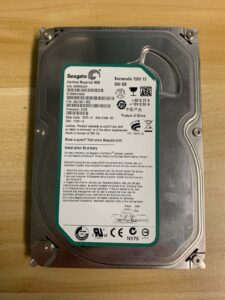 As you can see reading through this blog, beeping Seagate hard drives are almost always drives with stuck heads. I have an entire page dedicated to beeping hard drives if you want to learn more about the issue. The beeping sound comes from the platters not being able to spin up, which can be caused by a couple of different things: Power supply issue. If the drive is not receiving enough power, it will not be able to spin up properly. This can cause beeping or buzzing sounds. Power cable issue. While this is usually not the issue, something as simple as a bad cable can cause the hard drive to beep. Bent spindle. If the drive was dropped, sometimes the spindle can become bent which causes the drive to not be able to spin up. Failed motor. This is unusual, but it does happen. If the motor fails to work properly it will not spin up the drive and you will get a buzzing or beeping sound. An issue with the PCB. The PCB … Read more 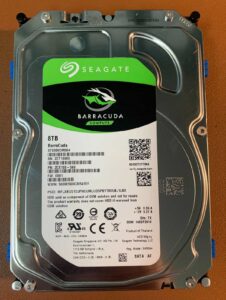 I remember the good old days when a “big” hard drive had about 120GB of capacity. Now when I get a big drive in, I am looking at somewhere from 2TB to 12TB of capacity. This particular ST8000DM004 data recovery was for an 8TB drive that had been inside an external enclosure. ST8000DM004 Just Stopped Working The Seagate hard drive was in use by a videographer based out of Wichita. They work on marketing and shoot HD video that is then stored on this 8TB ST8000DM004 hard drive. Unfortunately, the hard drive just stopped working one day, and they were not able to access any of their files. The drive had been working great prior to the issue, then suddenly would not be recognized by the computer. They weren’t even able to get the computer to recognize it enough to run software-based recovery methods on it. Due to the 8TB capacity, this ST8000DM004 data recovery would fall under our Standard+ recovery rate. While this rate is a little more than our Standard recovery rate, it … Read more 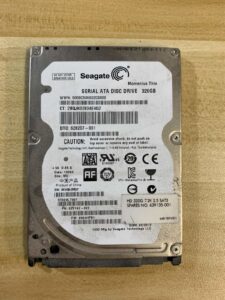 This Seagate ST320LT007 came in for data recovery from a client located nearby in Wichita, Kansas. The client needed the important work documents that were stored on the drive, but they could get gain access to the hard drive using their computer. Any computer that the drive was connected to would not find the hard drive. The hard drive was reported to sound normal, but the computers would not recognize it at all. These thin Seagate ST320LT007 drives commonly have hardware issues, so I was ready for the worst when it arrived and started with my diagnosis. A lot of these thin drives will get stuck heads, damaged heads, or other internal issues. But in this case, it was something else causing the problem. After discussing the project with the client, he decided to bring it in for my affordable data recovery service. Seagate ST320LT007 Diagnosis The hard drive did indeed spin up and sound normal, but it would not ID on my PC-3000. It did get ready, but that was as far as it … Read more 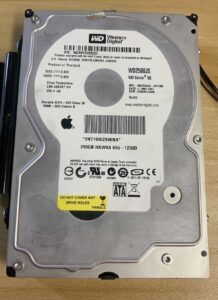 A shop we have worked with for some time sent this WD2500JS data recovery project to us to attempt to get the client’s important data back. The drive had been used inside an iMac for years before the iMac stopped working. The shop diagnosed the drive as having issues and needing data recovery and they sent the drive over to us for the project to be completed. WD2500JS Data Recovery Project The Western Digital hard drive arrived with the symptoms being described as the hard drive will spin up and sounds good, but won’t show up on any computer for data recovery software to access. Because the drive was reported as sounding good, with no drops, I started by connecting it to my PC-3000. Once connected, the drive spun up correctly just as described, and it got ready. I ran the utility for this drive and did all the standard fixes and got it configured for imaging. Once that process was complete I went ahead and left it connected to the PC-3000 and started the … Read more

This Seagate hard drive recovery project had the model number ST1000DM003. It came in from a local customer that needed their user data recovered. The client had initially taken their dead drive to a computer repair shop to have it diagnosed, but the repair shop told them that the recovery process was beyond their capabilities. Seagate Hard Drive Recovery This particular repair shop used to recommend one of the big data recovery companies that required you to ship your drive out to their California lab and would give you a quote once it arrived. The quotes from these big companies generally start at around $800 and go up into the thousands. A drive like this one would usually receive a quote of about $1200 for the recovery process. I went out to his particular repair shop and told them about my at-home cleanroom environment, my PC-3000 by Ace Labs, and my 10+ years of experience as a data recovery technician. They decided to start referring people to me as I was local, and as an … Read more 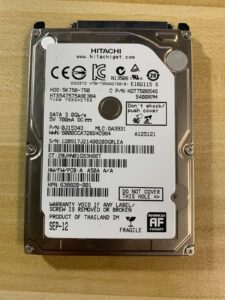 A customer called in to discuss their Hitachi data recovery as their hard drive had stopped working and was completely dead. The hard drive came from a laptop and stored important work documents that were not backed up anywhere else. The shop that the customer had brought the computer to for diagnosis had found that the issue was the hard drive and attempted to get the important files recovered. When the repair shop was unsuccessful in getting the data back, they recommended us to the client as a good recovery company. We have worked with this shop for the last year or so providing the best recovery services possible to their clients when they are not able to get the data back themselves. We have a few different options available to shops that would like to work with us, so please contact us if you are interested in working together! Dead Hitachi Data Recovery When the drive arrived I started with my standard visual diagnosis. In a case where the issue is reported to be … Read more 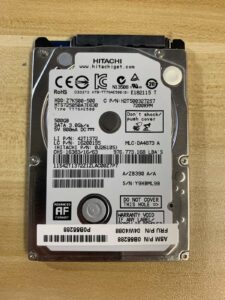 Sometimes even the most basic sounding issues with a hard drive can cause the data to be unrecoverable without specialized equipment and experience. This Hitachi hard drive recovery was one of those recoveries that sounded like the issue may require internal parts replacement, while in reality, the issue was just bad sectors. Hitachi and Western Digital A lot of people don’t realize that the hard drive portion of Hitachi was purchased by Western Digital in 2012. This drive is from after that merger, so this Hitachi drive was created by the Western Digital company.  To talk about the merger, you have to go all the way back to 2012. For those of us old enough to still have the battle scars, this was a year after the floods that caused hard drive prices to skyrocket for a time. In 2012, Western Digital Corporation announced that it would be acquiring Hitachi Global Storage Technologies in a deal worth $3.9 billion. The move marked a shift in the storage landscape, as Western Digital became the world’s largest … Read more 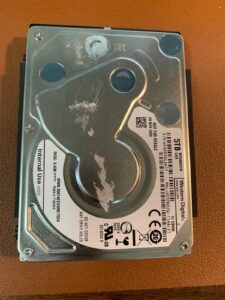 These massive 5TB portable drives continue to amaze me even after seeing them for years. I grew up in a time where having a 1GB 3.5” drive was amazing, so seeing 5TB in such a small form factor is really impressive. Unfortunately, these awesomely large-capacity drives still fail in various ways! This Western Digital Data Recovery was a WD50NDZW model hard drive that came from a client that said the drive wouldn’t mount on his computer any longer. 5TB Western Digital Data Recovery The issues had gotten worse over time, but now the drive would not be recognized by his computer at all. He brought the external USB drive to a local repair shop to see if the issue was with his computer or with the drive, and the shop confirmed that the drive would not show up on any of their computers either. They said they thought the issue was likely with the PCB on the drive. They reported the drive sounded perfectly fine, it just wouldn’t show up on their machine. The shop … Read more

The call came in for this ST1000LM010 with the description of a clicking hard drive that would not show up on the computer. The client had already received a quote from a larger data recovery company of $1500-2400 for a cleanroom data recovery, in particular, a head swap. So he was especially pleased to get our affordable cleanroom data recovery quote of $699. I let him know that clicking on one of these drives doesn’t always mean bad heads, but if it did indeed need a head swap then our lab recovery rate of $699 would apply. Cleanroom Data Recovery This Seagate ST1000LM010 FreePlay drive is part of the Sentosa family of hard drives. I have a lot of experience recovering these hard drives. I see them with firmware issues as well as internal issues like bad heads. Sometimes you will get behavior that sounds like internal parts issues, and it will end up being an odd firmware problem. I received the hard drive and started with a physical inspection. Because the drive was reported … Read more