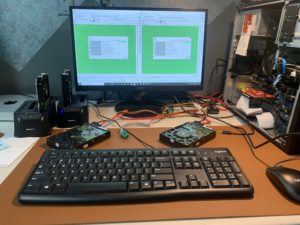 This client needed an affordable RAID data recovery service. Their Buffalo Link Station music server had stopped working and they called me from Wichita, Kansas requesting a RAID data recovery. The external RAID drive had two hard drives inside which were working together in a RAID 0 configuration. This means half the data was on one drive, and half the data was on the other drive. For those keeping score at home, these are Samsung HD103UJ 1TB Drives. The drives themselves did not seem to be the issue as much as a problem with the Buffalo RAID controller. Buffalo RAID Data Recovery I remember when I first heard about RAID 0, I thought it filled up the first drive until it was full, then started using the second drive. Or maybe one file would be put on one drive, and another file on the second drive. But this is not how RAID 0 works. RAID 0 Stripe Info Basically, the controller of the RAID (in this case the Buffalo controller) is set with certain settings … Read more